Small Business Contractor of the Year 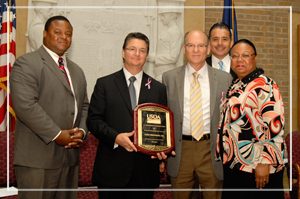 Kansas City’s own, Paris Brothers Inc. was recently selected by the United States Department of Agriculture as the National Small Business Contractor of the Year for 2011.

Paris Brothers was nominated and selected for this prestigious award as a reflection of the company’s overall contract performance and for doing its part to make effective commodity programs.

Since 2003 Paris Brothers has provided contract food distribution services for the USDA’s Multifoods program, providing a needed service to efficiently and effectively distribute food supplies to government supported agencies throughout the Western United States. What had begun as a test program quickly evolved into a permanent and successful government-private industry partnership.

Paris Brothers, a Kansas City-based, family-owned company, prides itself as a leader in an evolving world of specialized distribution services, primarily focusing on specialty foods such as artisan cheeses and coffee. Paris Brothers has developed inventive solutions to bring value to its various products’ supply chains starting with an innovative storage solution. Occupying more than 650,000-square-feet of naturally climate-controlled underground storage, Paris Brothers is able to quickly and efficiently move products in and out of the large storage area as well as maintain environmental standards by spending less on heating and cooling costs. Known as SubTropolis, the facility is owned by Hunt Midwest and is Kansas City’s largest underground storage facility.

“We’re honored to have been selected for this award. We have a hardworking team who is dedicated to the superior quality of our products and who has a true commitment to exemplary service to our customers,” said Joe Paris, co-founder of Paris Brothers.

The annual USDA Small Business and AbilityOne Award Program will take place in Washington D.C. June 22. Representatives from Paris Brothers will be at the program to accept the award.